Today I’m going to talk about the processes underlying our sleep-wake rhythm. I noticed there are already some nice blogs talking about today’s subject, e.g. http://cognitiveconvolutions.blogspot.com/2010/08/big-ideas-in-sleep-borbelys-two-process.html, but I’m still going to give it a try to explain it myself, since this just can’t miss from this blog.

One of the most important contributors to our understanding of the regulation of the sleep-wake cycle, with articles that are still heavily cited as we speak, is Alexander Borbély. The review I present you here will be mainly based on his articles, (see below for a list of references). If there are things that aren’t clear from this blog message, feel free to comment and I’ll do my best to elucidate it!

We are all familiar with the rhythmicity of the sleep-wake cycle, comprising of cycles of alternating sleep and wake over a period of 24 hours (in normal circumstances). Sleep pressure and sleepiness however often vary during this 24-hour cycle. Sometimes we feel sleepy during the day, sometimes it can be that we have trouble falling asleep, sometimes we wake up too early and can’t get back to sleep afterwards… Such fluctuations can to a large extent be explained by the interaction between the homeostatic and the circadian rhythm as explained by Borbély.

The homeostatic process (S) is pretty straightforward, the longer you are awake the higher the sleep pressure will become, while sleep will result in a reduction of sleep pressure and the propensity to wakefulness. It however doesn’t mean that the higher the sleep pressure as expressed by the homeostatic process it’s easy to fall asleep. That is because there is another process that regulates the tendency to fall asleep, i.e. the circadian rhythm. The circadian rhythm (C) is a rhythm that fluctuates with a cycle of about 24 hours (hence the name “circadian”). This rhythm (or oscillation) is driven by a so-called pacemaker, the suprachiasmatic nucleus, that is regulated by the light-dark cycle. The suprachiasmatic nucleus receives light input from the retina in the morning, by which the circadian clock is reset. This circadian clock or pacemaker synchronizes different physiological rhythms, e.g. body temperature, melatonin secretion, cortisol secretion… that play a role in sleep. So the light-dark cycle helps synchronize the homeostatic rhythm and circadian clock, with low sleep pressure corresponding to a circadian process that promotes wakefulness. In the picture below you can see how S and C interact when they are in synchrony. The bigger the distance between process S and process C, the higher the sleep pressure. So that’s the moment when sleep will normally be initiated.

We all know however that we can fight sleep up until a certain point, or use substances like caffeine to reduce sleepiness. External situations, like heightened arousal and increased concentration due to an exam or deadline coming up, can increase the so-called “upper threshold” by which we fall sleep. The circadian rhythm however continues in the 24-hour rhythm. Due to this fluctuation, fatigue after an all-nighter fluctuates, corresponding to the fluctuations of the circadian rhythm. 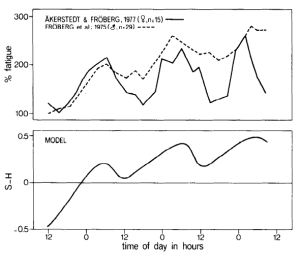 Rhythmicity in feelings of fatigue due to interaction between sleep homeostasis and circadian rhythm (Daan et al., 1984).In the above panel you can see empirical data of 44 people (15 solid line, 29 dashed line) that are sleep deprived for 24 hours. The percentage of fatigue shows a fluctuation that corresponds to changes in distance between the line denoting the homeostatic process and the line denoting the circadian rhythm (bottom panel) (also see the picture below to see how the distance between these two processes fluctuates when sleep deprived).

Here you can see how sleep pressure keeps building up due to sleep deprivation, but since the circadian rhythm keeps fluctuating by its regular 24 hour cycle, our sleep propensity will also fluctuate with this rhythm. In addition this picture also shows that such sleep deprivation will lead to a higher slow wave activity (SWA, representing deeper stages of sleep) during the recovery sleep. This type of activity is used as a marker for the homeostatic process. When we for example go to bed earlier when homeostatic sleep pressure hasn’t built up that much, this will translate into less slow wave activity. Even within a sleep cycle itself you can see this phenomenon, with less slow-wave activity during the second part of the sleep.

These last two pictures illustrate the interaction between the homeostatic process and the circadian rhythm nicely. If you want to know more in depth about this topic I recommend you read some of the references below (you can download the first reference for free). I hope I haven’t confused you all too much with the way I tried to explain this.

← The blessing of OpenCourseWare
Ideas worth spreading →