Is there proof that slow wave sleep is beneficial?

An example of a study manipulating one parameter of sleep (i.e. amount of slow wave sleep) while keeping other sleep parameters intact, is an acoustic perturbation experiment conducted in humans [1]. When slow waves were detected an acoustic stimulus was presented, gradually increasing in volume until stage 1-2 sleep was reached and acoustic perturbation was terminated, thus preventing the subject from awakening. Although sleep duration was maintained, as well as the amount of REM-sleep and the number of sleep state transitions, performance on a visual memory encoding task was negatively affected (this task consisted of responding with either ‘yes’ or ‘no’ if a presented image was previously seen in an initial set of 50 images).

Neuroimaging data revealed that during encoding of items that were later recalled successfully, the right anterior hippocampus had lower encoding-related activation following shallow sleep as opposed to normal sleep (see figure). Thus slow-wave sleep interferes with hippocampal functioning and can affect tasks that rely heavily on this brain structure (such as the visual memory encoding task). 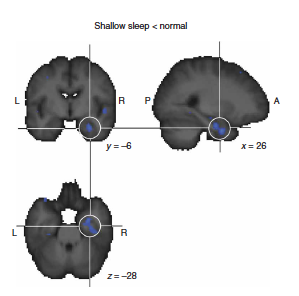 Memory reactivation, or so called memory replay, is another phenomenon seen during slow wave sleep, that provides evidence of the importance of this sleep stage in memory consolidation. The figure below (Wilson et al., 1994 [3]) reveals how place cells (as presented by the individual dots in the circle; http://en.wikipedia.org/wiki/Place_cell) that fired together (synchronised activity) during a spatial behavioral task in rats (“run”-phase), also had an increased tendency to fire together during subsequent slow wave sleep (“post”-phase), while this was not the case during slow wave sleep preceding the spatial task (“pre”-phase).

← From functional localization to functional networks
The stages of sleep →